In Backing Up Your Mac: A Joe On Tech Guide I say quite a lot about Time Machine, the backup app built into OS X. On the plus side, Time Machine is incredibly easy to use—and it’s officially supported by Apple. (It’s also the best way to restore individual contacts and email messages in Contacts and Mail, respectively.) Lots of people use Time Machine because it requires essentially no thought or preparation. You can plug in a properly formatted external drive, click one button, and get a full backup of your Mac, updated automatically every hour.

I used to be a big Time Machine fan, because anything that makes backups easier greatly increases the likelihood that people will use it.

But not so much anymore.

In fact, I still use Time Machine, but not exclusively. I don’t depend on it anymore, and I’d like to give just two recent examples to illustrate why.

A couple of weeks ago, not long before my new book was published, Time Machine displayed the following helpful error message on my Mac: “Time Machine couldn’t complete the backup to ‘Backup Drive’. Unable to compete backup. An error occurred while creating the backup folder.”

Huh. The Time Machine preference pane suggested that I try again later, and I did, with the same result. Since there was an error creating a folder, I guessed that the disk might have some errors, so I ran Disk Utility. Sure enough, there were errors, but Disk Utility couldn’t fix them. Neither could DiskWarrior. Or TechTool Pro. So I was left with no choice but to reformat the disk and start over from scratch.

I still don’t know what caused the problem, but neither Time Machine nor any disk utility I tried could fix it—and the hardware itself was, as far as I could tell, just fine.

When my backups become suddenly inaccessible for unknown reasons and I’m offered no solution but starting over, that sort of diminishes my faith in the software.

Then yesterday, Morgen’s laptop, which backs up to a completely different destination (a Time Capsule), displayed yet another error message: “Time Machine completed a verification of your backups on ‘Zora’. To improve reliability, Time Machine must create a new backup for you. Click Start New Backup to create a new backup. This will remove your existing backup history. This could take several hours. Click Back Up Later to be reminded tomorrow. Time Machine won’t perform backups during this time.” 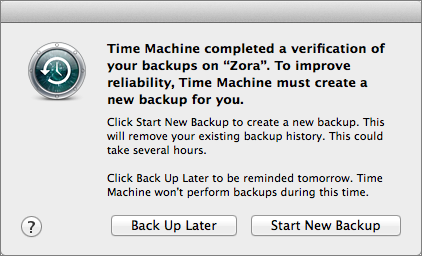 Huh. So, different message, but the same end result. Time Machine was informing her that, effective right now, her Mac would stop backing up and if she wanted it to continue, her only choice was to start over from scratch.

Now, for us, all of this was a minor irritation, because Time Machine isn’t the only software we use for backups. We also use CrashPlan (see Why I prefer CrashPlan for online backups) and Carbon Copy Cloner, not to mention not-quite-backup cloud services such as Dropbox. So we could wipe and restart our Time Machine backups without worrying that we’d lose any crucial data—there are plenty of other copies.

But if Time Machine had been our only backup solution, we would have been in a pickle.

So, word to the wise: use Time Machine if you like, but if you do, make sure you have other backups too. Until Apple makes some serious progress on Time Machine reliability and transparency, it’s not worthy of your trust. 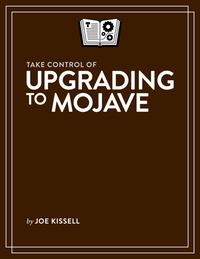