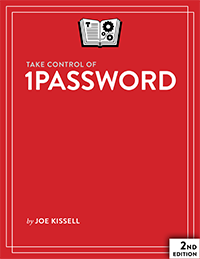 The Mac version of my favorite password manager, 1Password, has just been updated to version 6, with lots of great new features. (To learn more about what’s new, see my TidBITS article “1Password 6 for Mac Adds Teams, Expands Sync Options.”) For anyone interested in learning how to get the most out of 1Password (not just on OS X but also on Windows, iOS, and Android), I’m pleased to announce the publication of a massively revised second edition of my book Take Control of 1Password. The new book is 174 pages long, and costs $15. People who own the first edition can get it for half price (click Ebook Extras on the cover for details), and those who bought it in the past few months get the update for free.

There’s always a tricky line to walk when writing about a third-party product. On the one hand, I want everyone else to be as enthusiastic about this app as I am, so I’m excited to help people discover new ways to use it and figure out workflows that will make them feel it’s indispensable. On the other hand, I don’t want to make it appear more complicated than it is, and I know some people will say, “Geez, if I have to read 174 pages to make sense of this app, it must not be very user-friendly.” I sometimes worry that the mere existence of a book will backfire and turn people off, because of a feeling that apps should “just work.”

The way I like to think about it is in terms of cooking (of course). You don’t need a book to tell you how to make toast or boil water. You can feed yourself with nothing more than a microwave oven and a spoon. But if you want to make a fancier dish, you’re going to consult a recipe—and you’ll probably do that even if you’re an experienced cook. (You might also do that for meals with simple dishes but complicated logistics, such as Thanksgiving dinner.)

Same goes for software. Almost anyone can grasp the basics of 1Password without any help, but if you want to do fancy stuff—and believe me, you really do, because the fancy stuff is super cool and will save you all kinds of effort—a little bit of guidance will make it a lot easier. That’s what I do in Take Control of 1Password. I start from scratch so that beginners can find their footing quickly, but I also go far beyond the basics to cover the things power users will care about.

As usual, I spoke to Chuck Joiner about the book on MacVoices. Have a look (or listen):

As I mentioned in my TidBITS article, this book had been out of date for a very long time. Despite my discomfort that we were still selling a book that was out of sync with the app it described—the app had been updated many times since the last new version of the book—getting the two in alignment was surprisingly hard. There were a number of difficulties, but the main one was wanting to have the book match the app for more than a month or two. A typical cycle went something like this:

I can’t tell you how many dozens of times I’ve gone through this. Not just with AgileBits, of course, but with every developer we’ve worked with. It’s nobody’s fault, and pretty much inevitable in this business. (And I’m not even mentioning times when a developer has promised us a major update in six months, so we arranged our schedules accordingly, only to see six months turn into nine, twelve, and beyond. Even then, last-minute changes to software frequently wreak havoc with our publishing process. Sigh.)

So, if you’re wondering why another favorite book of yours (say, Take Control of Getting Started with DEVONthink 2) hasn’t been updated in forever, the reason is probably something along those lines. It’ll happen. It just takes time.